skip to main | skip to sidebar

Catholic Aid's Gather4Good event was a great success in New Ulm. Check out our pictures here.
Posted by Catholic Aid Association at 1:22 PM No comments: 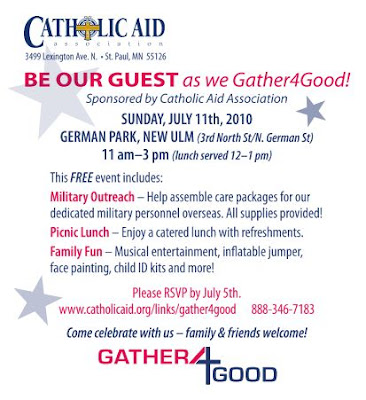 Posted by Catholic Aid Association at 8:46 AM No comments:

May/June Edition of the Fraternal Dispatch

Hello, and thanks for looking to Fraternal Dispatch for news, updates and ideas for
Fraternal activities through Catholic Aid Association.

Topics in this issue:

· Nominate your volunteers of the year

· A message from Director Kathleen Moriarty

If you have any problems with this download, email ads@catholicaid.org.

If you want to receive a paper copy of this newsletter, email cvoyda@catholicaid.org.

Your Fraternal Staff
Posted by Catholic Aid Association at 11:30 AM No comments: 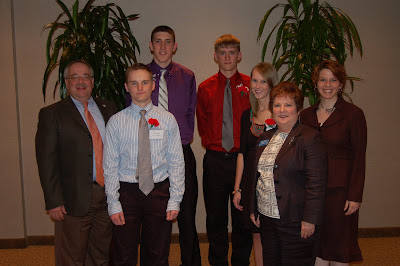 Congratulations to our Salute to Youth award winners! Salute to Youth is a national recognition program to honor high school seniors who give of their time, energy and talents to serve others and to improve themselves. The high school senior should be a member of the Catholic Aid Association, lead a balanced life, pay back to the community, and keep at least a 2.75 grade point average. Congratulations to John Kimlinger, Tony LeClair, Brooke Matuska and Buddy Schaust!

Learn more about each Salute to Youth winner here.
Posted by Catholic Aid Association at 8:50 AM No comments:

What's next for CAA?

Spring is a time of change. The snows melt, the streams and rivers swell, the earth eases out a sigh of moist organic smells and the sky is once again filled with the song of birds. Out from their shuttered homes troop the stoic Upper-Midwesterners to sunny, 40-degree weather and declare winter officially over as snowbirds return from their winter escapes.

Like those that came before it for untold years, the spring of 2010 will tempt out the winter-weary, drop a few more inches of unwelcome snow, then bloom into the season of green. Unlike those of years past, Catholic Aid is in for some changes as well.

Nothing remains static, true of nature and the nature of business. Change keeps things fresh, allows an organization to adapt, and prevents the stagnation of ideas. So at a spry 132 years old, what’s new for Catholic Aid in this coming year?

Making It Count
The social and service aspects of a fraternal society are part of what makes our Association so different from commercial insurers.

In 2010, Catholic Aid will test a pilot-program seeking to involve more people in larger, region-wide celebrations and service projects. It is the hope of the company to organize festive gatherings this summer and fall, while in some way improving the lives of Catholics and the communities in which they live.

A change announced at last year’s Convention was the plan for a shorter, one-day business meeting in August this year. With the money saved by shortening the main convention, Catholic Aid hopes to throw two or three member celebrations across its territory. The focus of these will not be the business of the Association, but the business of fraternalism.

The idea at this stage is to offer members and non-members the opportunity to take part in a volunteer activity that would directly improve the community in which it takes place.

“As far as we know, this will be a first for Catholic Aid,” Fraternal Director Kathleen Moriarty says. “Organizing a community event, leveraging our membership base to improve a community, offering a chance to give back – we like to think that our Council events do all these things, but we’ve never done it on such a large scale.”

In 2011, there will be time to reflect on the success of this year’s member celebrations, which will likely offer a community picnic, children’s activities and service opportunities, capped off by an outdoor Saturday evening Mass. The goals of the program are to increase the visibility of Catholic Aid in the communities and Dioceses it operates in, to improve the community itself, to increase awareness of the company and its products, and ultimately, to increase membership rolls. These events are meant to involve members and non-members, and we hope to have a large turnout.

Participants will have the opportunity to do a good work, meet new people, and see the power of an organized Fraternal in action. For kids and youth, it’s another way to improve college applications and instill a culture of service; for adults and seniors, it’s a way to give back to the community and work together.

For everyone, it’s a chance to spend a nice day outdoors with family and friends. Though no firm dates have been established, a trial run is hoped to be offered in early summer, with another one or two in the early fall.

Once again, the name game
For most members and employees of the Catholic Aid Association, however, no change will be more monumental than the one the delegates will consider at the official one-day convention in August.

Like a debate in Washington, this issue has been polarizing at times. One goal throughout the process, aided by this publication, has been transparency and due process. President Michael McGovern explains what has gone into this process so far:

“By last summer’s convention, we had committed to the name update enough to end our gathering with a video that explained why. After the convention, the real work began. We compiled names, sifted them against our criteria, checked whether they were legally available, commissioned a survey of members and non-members and compiled the results. There has been a clear winner, in all our surveys. And on Thursday, March 11, the Board voted to accept this name. The very next day, the Constitution Committee approved the name and declared the path clear for a vote at the convention. We’ll continue to accept feedback and hope to engage our members more than ever over the next few months to further understanding of why this name update is important to our organization.”

Before the Board vote, however, Lead Director Fran Barten spoke to her fellow board members and helped to crystallize exactly why she believes the update was necessary. “This is about our future, and our future members. If you Google ‘Catholic’ and ‘financial,’ we don’t even show up. Yet this is exactly what we do as an organization. We have to be able to be found by the current generation. They don’t look in the yellow pages, they don’t make the connection between ‘aid’ and ‘financial’ except in terms of college loans. Catholic is who we are. United is what we are. Financial is what we do. This name update is about our future, not our past. For those who, like myself, grew up with Catholic Aid, we have to remember that the most important element of our name, ‘Catholic,’ still comes first. It influences every decision we make, and so, like Catholic Aid, Catholic United Financial is Catholic first.”
The more things change

A yea or nay vote in August by the elected delegates of the Catholic Aid Association will determine what name the Association takes in the future. That control of this great Association is one thing that has not and will not change. We may try different ways of involving our members, or of holding our annual meetings, we may even change what we call ourselves. But none of those things changes who we are or what we do. And as always, the final decisions will rest in the hands of the members.

Meeting the Daily Needs of Our Seminarians...

The Monsignor Schuler Seminarian Charitable Trust was able to bless more than 100 seminarians with grants this year. The Trust gave out $25,200 in major awards and $11,500 in minor awards for a total of 109 grants and $36,700 total dollars awarded.

The numbers are high this year, but the most rewarding part of the grant program is receiving the moving notes of thanks and gratitude from the grant recipients.

Many seminarians said that the grants help them focus on their studies rather than fret about finances. “Time in the seminary is filled with many challenges, not least of which is the occasional financial challenge of books, travel and various other personal expenses. With your generous and prayerful support, it makes it possible for seminary to be a time to be concerned with the study of Theology, formation and especially to be growing in prayer,” wrote Jeremy Vidmar.

Lee Fortin of Watertown, S.D., agrees. “It’s scholarships like the Msgr. Schuler Trust that allows seminarians the time to focus on classes, discernment and formation. I encourage you in this giving because it is becoming ever more apparent to me that our God is never outdone in generosity.”

This is the fourth grant that Matt Wiering has received since starting his studies in Rome more than three years ago. “After my ordination, I will obviously no longer need the grant, but I will always remember the help the Schuler Charitable Trust gave me during my seminary years,” Wiering wrote to the Trust in a letter.

The grants helped seminarians travel back home for holidays. “Thanks to your generosity, I am able to get back to my Diocese for Holy Week to serve and celebrate with our Diocese at our Mass,” said Seth Gogolin of Brainerd, Minn. Gregory Haman of Fargo, N.D., also used his grant money to make a welcome trip home for the holidays.

The grant will help Deacon Alex Carlson travel to Ares, France, where he will prepare for ordination on May 29, 2010.For others, grant monies made sure that some unexpected bills weren’t a burden. “I recently had to replace my glasses; the Msgr. Schuler Grant paid for this unexpected expense,” said Aaron Kalmon of Superior, Wis. “Thanks to your gift I’ll be able to pay my car insurance and for some gas,” said Sean Mulligan of Grand Forks, N.D.

Grant recipient Elliot Huss of Coon Rapids, Minn., testified not only to the importance of the grant he received, but also to his fellow seminarians. “I can personally attest to the quality of men in the seminary currently and want you to know your hard work could not have benefited a greater bunch of young men. Please also know your generosity is greatly appreciated,” said Huss.

Donations to the Schuler Charitable Trust can be made online at: www.catholicaid.org/links/schuler. Click on the blue “Donate Now” button.

Read more about the Schuler Charitable Trust.
Download the photos and names of the 2009 seminarian grant recipients.
Donate now to the Schuler Trust (via www.razoo.com)
Posted by Catholic Aid Association at 6:55 AM No comments:

The Results are In...

The 2009 Catholic Aid Membership Drive results are in!

Catholic Aid's 'Nuts for New Members' contest offered prizes and incentives for councils and members who help Catholic Aid generate new member growth. With our member's help and their positive word-of-mouth, we worked together to add new members and make an even greater impact on the Catholic community! Click here for more information!
Posted by Catholic Aid Association at 10:07 AM No comments: